The Caerleon-class Floating Battleship (カールレオン級浮遊航空艦, Kārureon-Kyū Fuyū-Koukūkan) is a line of Britannian light aerial cruisers, also known as "Light Avalons", which commonly serve as Escort Ship in the Britannian Aerial Armada. It is named after the village of Caerleon, from Arthurian legend

The Caerleon-class has five turrets three on the top and two below the ship, several missile launchers and one launch catapult, and also utilizes Blaze Luminous shielding. They can carry at least 3x VTOL gunships (Operation Pacific Ocean Ambush), and presumably carry flight-capable knightmares.

The Caerleon-class is weaker than the Logres and considerably weaker than the Avalon. In R2 episode 6, a small number of Black Knights Burai and Gekka knightmares (the latter carrying rocket launchers) were able to disable the float engines of four Caerleon escorts sufficiently to make them crash, even with their shields online.

The Caerleon class appears in large numbers, suggesting that it is considerably cheaper to build and maintain than larger (Logres) or more sophisticated (Avalon) floatships, and are generally used as escorts. The class formed the backbone of the Britannian Air Force, appearing from R2 episode 6 onward.

Caerleon seen from below.

Caerleon seen from above 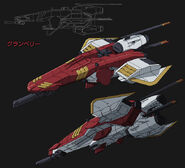 The Caerleon-class Floating Battleship crewed by the Glinda Knights.
Add an image to this gallery
Retrieved from "https://codegeass.fandom.com/wiki/Caerleon-class_Floating_Battleship?oldid=73784"
Community content is available under CC-BY-SA unless otherwise noted.