Cécile is a kind, compassionate and slightly shy person. She respects her superiors, but doubts them when their intentions are misguided as shown numerous times when Lloyd pushes Suzaku to use the Lancelot to its fullest output. However, she is not weak-willed and would do anything to protect her friends as shown when she speaks out against many people when they threaten Suzaku and Lloyd.

She is a capable scientist in her own right, having designed the Energy Wing system used on the Guren S.E.I.T.E.N. Eight Elements-Type and the Lancelot Albion.

Cécile is a kind-hearted woman and a good friend to Suzaku Kururugi, often helping him with homework. She also acts as Lloyd's conscience, not hesitating to scold him or physically punish him for his unintentionally rude remarks. Cécile is a capable Knightmare Frame pilot, managing to single-handedly hold the entire contingent of Black Knights sent to occupy Ashford Academy during the Black Rebellion at bay using a customized Sutherland modified with equipment from the Lancelot. Prior to joining Lloyd in the military, she studied at the Imperial Colchester Institute. A recurring joke is that Cécile is a bad cook, which no one has the heart to tell her: her recipes include onigiri mixed with blueberry jam and sandwiches made with ginger, sugar, and wasabi.

Cécile makes her first appearance alongside Lloyd giving her opinion on what the Britannian military is doing in the Shinjuku Ghetto. After Suzaku awakens, she helps him get prepped for his first time piloting the Lancelot.

Cécile later appears at Ashford Academy looking for Suzaku. She asks if it's all right to take Suzaku with her since he was with both Nunnally and Lelouch. Afterward, she, Lloyd, and Suzaku are at the Britannian Prison where Lloyd must sign papers since Cornelia changed Tohdoh's executioner to Suzaku.

When Ashford Academy had their School Festival, Cécile is seen playing a game similar to whack a mole but with actual students to hit. Strangely, she only hits one of the five students for the whole entire game. The members with her deduce that the student is similar to the appearance of that of Lloyd and that is the reason why she only goes after that student. Then, Princess Euphemia loses her cover and Cécile is able to help by slowing down the media and crowd.

During the Black Rebellion, she appears with Lloyd in her customized version of the Sutherland to help Suzaku by destroying the Gefjun Disturber which was disabling the Lancelot. After Suzaku leaves to go after Zero, Cécile stays to help ward off the Black Knights in Ashford Academy. However, during the fight Nina appears with a Ganymede that is outfitted with a prototype nuclear reactor capable of easily taking out the Tokyo Settlement. However, it fails to detonate, allowing Cécile time to disable it.

Following Lelouch's ascension to the throne, she follows Lloyd and Suzaku and willingly accepts Lelouch as the new emperor. She works with Lloyd and Nina to create a countermeasure to F.L.E.I.J.A. and proceeds to assist Sayoko during the rescue of the hostages on board the Avalon under Lelouch's order. She is later seen incarcerated with Rakshata, Nina, and Sayako, along with Lloyd and other males in the neighboring cell who were on board the Avalon during Lelouch's battle with Schneizel, having a conversation about moving into the future. She notes to Nina about the "starting point" she and her fellow scientists had which lead to Lloyd's nickname "Earl of Pudding". She is also aware of Suzaku's and Lelouch's plan, the Zero Requiem. She and Lloyd are last seen in Viletta's wedding picture.

Although not stated explicitly in the Anime, Cécile does indeed have strong feelings for Suzaku. Despite the age gap, Cécile confides to C.C. that she loves Suzaku in Turn 22.05 of the R2 Picture Dramas, mentioning that this is true "if we go by the definition of love."

She works with Lloyd, although she ranks below him. While Lloyd admits to Nina that he lacks empathy, Cécile seems to be a counter to that, being kinder and more considerate of people. She also understand Lloyd's views of people, determining he has no interest in women while he was engaged to Milly. In regards to talking about people, Lloyd only appears comfortable about discussing such matters around Cécile, such as when he mentioned to her about the frailties of humans in regards to Suzaku in Stage 25. Cécile also pilots Knightmare Frames that Lloyd has developed, although she is mostly on the ground.

In the spinoff Suzaku of the Counterattack her character is replaced by Mariel Labie. 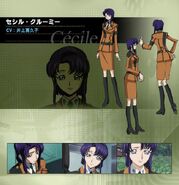 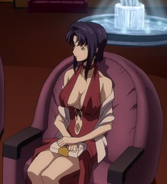 Cécile during the meeting with Zero in episode 8 of R2

Cécile in her pilot suit

Cecile in Resurrection with Lloyd.
Community content is available under CC-BY-SA unless otherwise noted.
Advertisement