The Byakuen (白炎, Byakuen, lit. White Flame) is a custom Knightmare Frame based off the predecessor to the Guren Mk-II, the Guren Mk-I, that was first developed in the Militarized Zone of India. Like the Guren, the Byakuen is superior to fifth generation Britannian Knightmare Frames, and its technology is on par with most seventh generation Knightmare Frames. The Byakuen also features the same cockpit layout and motorbike-shaped pilot seat as the Guren, and has a beetle-like horn sprouting from the top of its head. The only existing unit is in the possession of the terrorist organization "Peace Mark" and is piloted by Orpheus Zevon.

The Byakuen's main feature is its "7-Type Integrated Armament Right Arm" (七式統合兵装右腕部), or "7-Type" for short. The 7-Type consists of a series of short and long-range weapons stored in a golden apparatus that is attached to the Byakuen's right arm, and allows the Byakuen to adapt to any battle situation at a moment's notice. The 7-Type is comprised of seven weapons: a regular manipulator hand at the end of its arm; two irregular red blades that can be used as a single blade with a jagged edge, a combined blade with the two pieces joined together, or as a giant scissors weapon; a drill that can easily pierce through heavy-armored Knightmare Frames; an ultra-output electromagnetic accelerator cannon that can switch its cartridge and fire either armor-piercing rounds or grenades; and also another weapon that is not finished yet and will be added only to the upgraded version of Byakuen.

Aside from its 7-Type, the Byakuen's only other weapon is a single Slash Harken stored on the left side of its chest. It does, however, have a EMP device known as the "Gefjun Breaker" mounted in the horn on its forehead, which is based on the technology of the Gefjun Disturber invented by Rakshata Chawla. In exchange for massive consumption of the Byakuen's Energy Filler, the Gefjun Breaker can stop the movement of all Sakuradite-powered devices within a 100m circumference surrounding the Byakuen. However, the Byakuen itself also loses power because of the Gefjun field as well, making it a double-edged sword.

After being damaged in the battle against the Guren Mk-I, the Byakuen was repaired and equipped with the prototype Air Glide Wing System developed by Rakshata Chawla for the sake of test data, with the redesignation of Type-01/CF1 Byakuen Flight-Enabled Version (白炎可翔, Byakuen Kashō, lit. White Flame Aerial). However, because this Air Glide Wing System is a prototype, it is not loaded with the small missiles the later mass-production type would be equipped with. Otherwise, the Byakuen has the same specifications as before in this form. 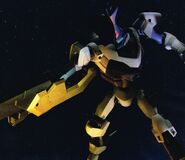 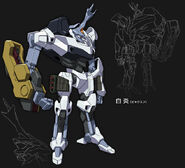 Byaken model (front and back) 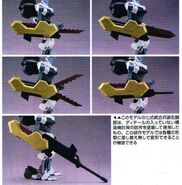 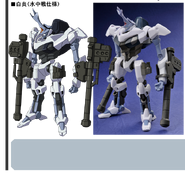 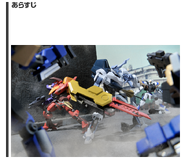 Byakuen fighting alongside the Guren
Community content is available under CC-BY-SA unless otherwise noted.
Advertisement