The Burai Kai (無頼改, Burai Kai) is an optimized version of the Type-1R Burai Knightmare Frame, and was created for the Japanese Liberation Front's elite strike unit, the Four Holy Swords. Developed by the Kyoto House and designated as the "Type-10R", they make their first and only appearance during the Battle for Narita (episode).

The most distinctive change to the base Type-1R unit is the addition of a pair of long, trailing antennae mounted on the back of the head. Unlike the original Burai, its performance has been better upgraded, which allows it to better take on higher spec Knightmares such as the Holy Britannian Empire's elite RPI-209 Gloucester unit. However, despite these upgrades the Kai still falls under the 4th Generation category, and its success as a combat efficient machine is more probably due to the skill of their corresponding pilots.

Other than the aforementioned additions to the head, the Burai Kai maintains the exact same appearance as the original Burai, with the chest mounted anti-personnel machine gun, and fixed hand guards. Unlike the standard JLF Burai units, Kai's used by the Four Holy Sword members are seen in beige with brown secondary trim colors, while their leader, Kyoshiro Tohdoh pilots a custom white Burai Kai which is easily distinguishable when in battle.

Though capable of wielding the same weapons as the standard Burai, the Burai Kai's primary weapon is the Revolving Blade Sword (Katen Yaibatou) a powerful chainsaw-bladed katana which is almost as strong as the Britannian MVS (Maser Vibration Sword) technology, thus making the Kai a machine with a focus on close quarters, anti-knightmare combat.

Although proven to be an exceptional machine, all five Burai Kai units are abandoned following the Japanese Liberation Front's retreat during the Battle of Narita, and the Four Holy Sword pilots eventually upgrade to the superior Type-3F Gekka Knightmare after joining the Black Knights.

The Burai Kai make their only appearance during the Battle of Narita in .a.t.b 2017. With Tohdoh and the Four Holy Swords piloting them, they were a force to be reckoned with as they were able to destroy some of the Britannian Knighmare forces, and hold off Cornelia's Royal Guard detail along with Guilford and Andreas Darlton. However, after Zero and the Black Knights retreated, they were forced to abandon the Burai Kai machines and to retreat with the remaining survivors of the JLF. 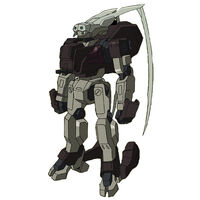 Add an image to this gallery
Retrieved from "https://codegeass.fandom.com/wiki/Burai_Kai?oldid=71006"
Community content is available under CC-BY-SA unless otherwise noted.