The Royal Britannian Navy is the Naval Warfare service branch of the Britannian Armed Forces. While battleships are seen used by the Empire in early battles, ships do not play an important role in the show. This lack of a large naval force in the area is possibly why the Black Knights chose a submarine as one of their first headquarters. However, the Britannian military is by no means incapable of aquatic or even deep-sea combat, as shown by effectiveness of the Royal Marine Infantry Portman series of amphibious frames. At one point it was mentioned that one of the Navy's units is the Pacific Fleet, meaning it was most likely organized based on regions.

Not much is known about the Royal Marines other than they serve as a branch for the navy, it is safe to say that the role of the Marines in the Code Geass universe is still the same as it were in the real world they are responsible for the use of Amphibious Warfare during missions and serving as the Ground Units for the Navy, they are only shown in screenshot during the first episode performing amphibious landing on the shore of Japan.

The Marines are most likely based on the Royal Marines maintained by the United Kingdom in the real world, as they would have been active during the retreat from the British isles and the migration to the American continent. This would give them the role of commandos and rapid response units in their new modern setting.

The Royal Marine Infantry or RMI is the official designation for the Knightmare Corps. in the service of the Britannian Navy the RMI specialize in Naval and Amphibious Warfare although during Battle of Mt.Fuji a single unit of Portman II equipped with Float System can now participate in Aerial Combat but to what extend is not yet made clear, the Mechanized division is the equivalent of the Royal Panzer Infantry of the Britannian Army unlike the Royal Panzer Infantry the RMI receives little notice in the series and only appear in a few episode. In Area 11 the Navy was stationed in Shikine Island alongside the RMI both of them is protecting the base from any Naval threat. The RMI staple Knightmare Frame is the Portman series.

Two types of Britannian warship are shown in the anime. The most common are the Destroyers, which may have been modelled on the real-world Type 45 Destroyer. No class-name or ship names are given. Its armament includes a deck-mounted cannon and a vertical missile system, which can fire ASROCs, though it may include missiles of other types. The other type is a larger Carrier-Battleship hybrid (search the Gallery). It is shown as having a trimaran hull, with the outboard hulls supporting two flight decks. It's armament includes two twin gun turrets, a vertical missile system, and numerous CIWS turrets, along with a complement of Portman knightmares. No names are given. All naval guns are shown to be cylindrical in shape and cross-section, implying that they are either conventional guns or electromagnetic coilguns.

Their main appearance is in R2 Turn 07 The Abandoned Mask (episode) in which Suzaku attempts to chase down the Black Knights submarine with the help of a naval task force consisting of one Carrier-Battleship and at least 7-8 Destroyers. Suzaku's console screen shows a total of 32 ships, the bulk of which appear to be Destroyers.

A third type, the Dreadnought-class Aircraft Carrier, is shown in the Oz the Reflection manga (image in Gallery). The only named ship known is the Brigantes, which serves as the flagship of the Virginian Fleet stationed at Norfolk, Virginia. Its armament includes three twin-barreled deck-mounted cannons, forty-two vertical launching sylos, and four aircraft catapults. Its only appearance is in Oz the Reflection: Volume 2, Mask 5, in which General Upson Thompson leads a handful of ships to intercept Lord Wilbur Millville and the Wings of Talleyrand on the way to Pendragon. It is accompanied by at least 5 Carrier-Battleship hybrids. The Brigantes suffered heavy damage during the battle. 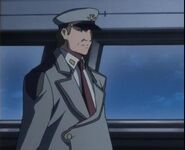