The Britannian Infantry are the conventional foot soldiers of the Britannian Ground Force. Britannian foot-soldiers are typically outfitted with assault rifles, pistols, body armour, and helmets with electronic visors. They are well trained and very loyal to the Empire. They were also present during Emperor Lelouch's regime. Britannian infantry seemed to be armed with a longer barrelled rifle during the Invasion of Japan. However, when Knightmare Frames became the main arm of the Britannian army, the infantry switched to the short barrelled assult rifle commonly seen in the series. Since the introduction of the Knightmares, the infantry seem to be deploy as bodyguards, ground support, shock troops for infiltrations and death squads. They are shown to be very ruthless and efficient giving little to no regards to civillians or enemies. They are also trained to fight enemy knightmares as a squad of St. Michael knights took down an EU drone by using a slinged explosive to destory its leg before proceeding to fire on the cockpit. 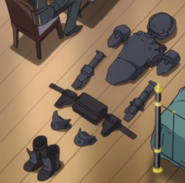 Britannian Infantry during the Invasion of Japan. Note the different assault rifles.
Add an image to this gallery
Retrieved from "https://codegeass.fandom.com/wiki/Britannian_Infantry?oldid=68597"
Community content is available under CC-BY-SA unless otherwise noted.