The 'Britannian Imperial Family' (皇室 Kōshitsu) rules the Holy Britannian Empire. The members of the family hold the highest positions within its government and military. The Imperial Family are descended from Sir Ricardo von Britannia, the designated heir and lover of Queen Elizabeth III. When they die, an emperor or empress is buried in the Imperial Mausoleum.

The princes and princesses use the same nobility particle as their mother. For instance, Lelouch vi Britannia was the son of Marianne vi Britannia, and Clovis la Britannia was the son of Gabrielle la Britannia. Though the names of only two of Charles's consorts are known, the differing names of his known children alone can be used to infer that Charles has, or has had, at least ten consorts. The number of children and precise way of determining inheritance is unknown. Lelouch himself was both the 11th Prince and 17th heir to the throne while Nunnally's rank in the order of succession was 87th.

Lelouch became the 99th Holy Britannian Emperor through the force of arms and power of Geass, ignoring that many of his brothers yet live.

Marrybell, although a princess older than Nunnally, was still lower ranked in the succession than she.

Each member of royalty is entitled to elect a personal guardian called a "Knight," who is given authority and placed directly under their command, though only Cornelia and Euphemia are shown to have done so, other than the Emperor. Cornelia's Knight is Guilford who, along with her, commands a unit of Knightmare Frames. Suzaku Kururugi also served as personal Knight to both Euphemia and Lelouch (as the Emperor of Britannia), donning the title "Knight of Zero" in his service with the latter. In Oz the Reflection, Oldrin, Lyre (Orpheus), and Oiagros Zevon served Marrybell as her Knight during Charles' and Lelouch's regime and Carine is likewise shown to have a personal knight, named Dasko la Clermont.

Other Members of the Imperial Family

The following includes members of the Britannian Imperial Family who appear in side-stories and other material related to the Code Geass series. Some members may be non-canonical to the primary Code Geass timeline.

The brothers are named after the Castor and Pollux, twin brothers from Classical mythology who becomes identified as the twins in the constellation of Gemini.

Claire li Britannia is a princess of Britannia during Japan's Edo era, originally sent to Japan at a young age by her parents to avoid being harmed by the conflict amongst the members of the Imperial Family. In Japan, she resided in a hidden village of fallen Japanese nobles under the alias of "Carla."

Her identity is later revealed to her friends when Alto Weinberg arrives in Japan with the purpose returning Claire to Britannia as its next empress. By unknown means, the previous emperor Aurelien died and First Prince Basilio was assassinated, splitting Britannia into various factions. Lorenzo il Soresi, who controlled the most powerful faction, wished to have Claire serve as his puppet. Upon arriving in Britannia and allying with her younger brother-in-law Neils, Claire took control of a sizable portion of Britannia, enough that she became a threat to Lorenzo, who invited her to a conference. At the meeting, Lorenzo revealed that she was the only living member of royalty that had any aptitude for ruling. Her brother Richard was skilled at painting and music, but had no interest in politics, and other siblings such as Biaggio, Zofia, and Candy were only interested in frivolity.

Marrybell mel Britannia is a Britannian Princess and the 88th in-line to the succession of the throne. She is the founder and leader of the Glinda Knights, a counter-terrorism organization within the Britannian military. Though she appears gentle and refined, she personally serves on the frontlines as the captain of the Grandberry, the Glinda Knights' floating airship. Thanks to her keen strategic abilities, she gained the favor of Second Prince Schenizel, who granted her priority use of any prototype machines developed by Camelot for the Knights of Rounds. 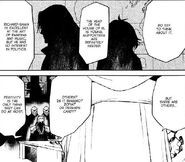