Founded
a.t.b. n/a (sometime after the creation of Britannia's Military and functioning aircraft)

The Britannian Air Force is a branch of the Britannian Military that is responsible for overseeing all aerial based warfare operations in service of the Empire. Much like the rest of Britannia's military, the Air Force is shown to be highly advanced using technology such as VTOL aircraft, and even larger scale VTOL powered Airships later in the series, all while still making use of traditional combat aircraft. The Air Force plays a minor support role in the series, however they alongside other military branches contribute in some of the key battles and events of the series as a whole.

Britannia's Air Force are tasked with a number of roles within the empire, the primary one being guarding the skies of both Britannia and her subsequent colonies. Aside from defense duties, the Air Force is shown to be involved in offense operations with the mainline Military, providing air support for units on the ground, clearing the area of enemy air units, and the transportation of large numbers of ground forces to designated locations on the battlefield. When not involved in full-scale military operations, the Air Force are usually seen conducting escort duties for special VIP's or members of the Imperial Family transporting them between the various colonies, country's, and the homeland.

The Air Force makes use of many different types of Aircraft, each one having their own designated purpose and role to play within the Air Force itself. The most basic of the air forces arsenal is the "Britannian Jet Fighter" plane, which performs much like any traditional combat aircraft in the real world, providing air support to ground units and ensuring total control of the skies by engaging hostile aircraft. Alongside these combat Jet aircraft, the Air Force are shown to use large Transport Planes for moving quantities of troops and cargo in military operations such as the Invasion of other countries. While efficient enough, these Jet based airplanes were shown to be used less and less sometime after the Invasion of Japan in a.t.b 2010, in favor of VTOL (Vertical Take off & Landing) capable aircraft such as the "Britannian VTOL Gunship" which could provide support for ground forces whilst being able to maintain areal superiority at a much more efficient rate, as they can be scrambled and launched into action far quicker than normal jet propelled aircraft would. Alongside the VTOL Gunships, Britannia's Air Force are shown to use smaller scale VTOL transport craft, there are two types known to be in service: The first is a troop transport, capable of air lifting infantry units into and out of the battle. The second is an aircraft designed for transporting and deploying the Army's RPI Knightmare Frames into combat zones, this craft is known specifically as the "T-4 VTOL" or "KMF VTOL" drop ship and is commonly seen as the use of Knightmare Frames becomes more frequent. Aside from combat focused aircraft, the Air Force also houses a number of "Imperial Shuttle planes" reserved for high-ranking members of the Britannian government, military, or Imperial Family for use in traveling between different country's or Areas.

Later in the series, as the development of VTOL and Float System technology becomes more common, the Air Force begins incorporating large scale Floating Airships, creating Britannias first ever Air Fleet. As well as the already developed Avalon Class Battleship, the Britannian Air Force created two other class of Floating Battle ships: these being the "Caerleon-class" and "Logres-class" Battleship, the latter of which become the Emperors personal flagship "The Great Britannia". All three of these Airships would see continued use by the Air Force for both combat operations and routine escort/transport duties. As well as the development of airships via the use of Float Units, the Air Force also began absorbing Knightmare Frames that could be equipped with Float Units into its arsenal, mainly for the use of escorting their convoys of Airships. While VTOL Gunships were still heavily used and could be deployed from the Battleships, FA (Flight Authorized) designated Knightmare Frames became more and more common place within the Air Force, most likely due to their large amount of production numbers, speed and combat efficiency, and the ability to quickly land in order to engage enemy ground units. The Air Force had their own special variant of the RPI-13 Sutherland which was equipped with a Float Unit and painted in distinctive grey and red color markings, though any Knightmare with Float System capabilities was welcomed into the Air Force for service.

In terms of identification, standard Air Force personnel are shown to wear the standard Britannian Military tunic uniform but in a dark grey color scheme with red markings on areas like the neck tie and officers hat. Pilots of the aircraft's are shown to wear a grey flight suit with a black colored flight helmet. Like other branches of Britannia's Military, the Air Force can be identified by the golden winged crest seen on their various aircraft and service uniforms.

The Invasion of Japan

Little is known about the Britannian Air Force during the Second Pacific War, other than they also participated in the Invasion of Japan in 2010 a.t.b. During the opening scene of the first episode, they are seen providing aerial support with the Jet Fighter planes, and they also had the capability to transport the first combat ready Knightmare Frame Glasgow with the very first Knightmare VTOL dropship.

Post Japanese invasion by the Britannian Military has left the Air Force with little to do in regards to Area 11 and as such it leave it to the Britannian Police VTOLs to patrol the Tokyo Settlement and other city's skyline. Only during an extreme emergency situation such as terrorism would the Air Force be shown to mobilize, usually sending in squadrons of VTOL Gunships to engage the threat, or using their T-4 KMF VTOLs to deploy Knightmares to neutralize the threat head on. The Air Force played little part in assisting the Army with encounters against the Black Knight movement in 2017 a.t.b, instead mostly providing for the transportation of ground troops and Knightmare Frames when necessary. The only time the Air Force was shown to fully mobilize during the first Black Rebellion was during the Assault on the Tokyo Settlement in which Britannia's ground forces were completely scattered, and thus full scale aerial bombardment and support was needed in order to achieve Britannian Victory. Interestingly enough, this was the only time Jet Fighters made an appearance again after the initial invasion of Japan, and see little to no use later in the series.

After the failed coup d'état of Wilbur Milville, Britannia makes a greater effort to advance their airforce after its aerial forces suffered considerable damage. The Britannian Air Force begins investigating replenishing its lost fighting power with float unit-equipped knightmare frames. The Glinda Knights, who make use of a heavily modified Caerleon-Class Battleship, the "Grandberry", as their personal mobile headquarters, prove the versability of floating battleships. The California Armored Munitions Arsenal, Rhongomyniad Factory, begins excellerated production of Caerleon-class ships. The planning stage for a floating carrier that will improve upon the Avalon begins. Initial plans for Damocles are also begun. Miss X contracts Orpheus and his team to destroy a new-model of Britannian bomber capable of super-long-distance and high-altitude. Later on, in order to complete her Air Glid Wings, Rakshata hires Peace Mark to steal the latest model of the Float System. Heading to Andersen Base, Orpheus engages with a group of Sutherlands on a test flight, and captures one.

After the creation of the Avalon that uses the revolutionary Float System, the Britannian Air Force quickly enter two more Battleships of its kind into service by 2018 a.t.b. In just a short time the "Carleon-class" and the "Logres-class" Battleships dominate the sky of Area 11 and other Britannian colonies, in addition the Air Force also lets the Knightmare Frames fill the role of combat aircraft with the mass production of smaller scale Float Unit systems. The Holy Empire of Britannia is the only nation that posses a Battleship armada of its kind with the exception of the Black Knights and the U.F.N.

A flight of Britannian aircraft 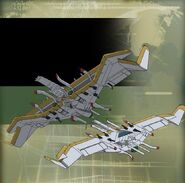 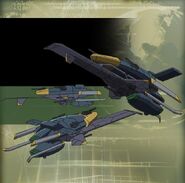