Start a Wiki
The Bradford (ブラッドフォード, Buraddofōdo) is an experimental transformable Knightmare Frame developed as the prototype for the personal and dedicated Knightmare Frame of the Knight of Three, Gino Weinberg. It was designed by the Steiner Konzern, a conglomerate run by the Steiner family, a engineering noble family that served the Weinberg family. For the sake of obtaining operational data for its successor, the Tristan, the Bradford is assigned to the Glinda Knights soon after their return from Béjaïa. Its initial test pilot is Marika Soresi, before it is given over to Leonhardt Steiner, the heir of the Steiner family.

Developed for the purpose of obtaining air superiority among Knightmares, the Bradford is the first Knightmare to utilize the transformable "Fortress Mode" function with the ability to transform into a fighter jet. However, because the Float System has yet to be generalized and mass-produced, it is instead equipped with an electric-powered plasma propulsion motor for flight. Like most Glinda Knights Knightmares, it has a red and gold colour scheme, and its overall design is very similar to the Tristan's. Also like the Tristan, it is equipped with two giant "Megiddo Harkens" on its arms, which it can launch in both Knightmare and Fortress mode. It also has two specialized weapons known as "Dual Arms" attached to its legs, which can be used as hand-held and combinable Tungsten Steel Blades in Knightmare mode, and Linear Cannons in Fortress Mode. It is also equipped with a weapon based on the Hadron Cannon known as the "Hadron Spear", which is activated by the Bradford firing and combining its Megiddo Harkens, which gathers a sphere of energy in the space between the Harkens and then fires it as a straight Hadron beam that extends far.

The Bradford also has the ability to dock with the back of the Lancelot Grail in "Direct Link" mode, thereby forming a combined Knightmare known as the Grail Air Cavalry. It can do the same with the Vincent Gram and become the Gram Air Cavalry. 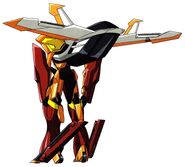 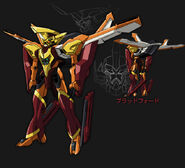 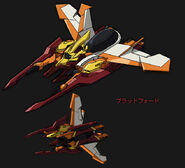 Hadron Spear (Set up and Firing)

Bradford in the Tristan's colors
Add an image to this gallery
Retrieved from "https://codegeass.fandom.com/wiki/Bradford?oldid=69696"
Community content is available under CC-BY-SA unless otherwise noted.