Designed for the Black Knights, the submarine was provided by the Military District of India. It houses all of the Black Knights members and has an array of rooms including the command room and cafeteria. It also has storage room to store various cargo as well as knightmares. For weapons, the submarine is equipped with six torpedo launchers and cruise missile launcers with detonators. Additionally, it has two Slash Harken-like anchors and stealth system as a result from the Gefjun Disturber. 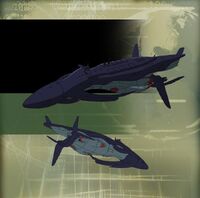 submarine-weapons
Add an image to this gallery
Retrieved from "https://codegeass.fandom.com/wiki/Black_Knights%27_Submarine?oldid=64863"
Community content is available under CC-BY-SA unless otherwise noted.