Bismarck Waldstein (ビスマルク ヴァルトシュタイン, Bisumaruku Vuarutoshutain) was the final man to bear the title of the Knight of One under Charles zi Britannia, formerly known as the strongest amongst the Knights of the Round before being defeated by the former Knight of Zero, Suzaku Kururugi.

He wears a white cloak that the Knights of the Round wear, and pilots the Knightmare Frame Galahad. His left eye is kept sewn shut, in order to keep his Geass in check. Despite his status and combat abilities, he believes that war should be used as a last resort, and also sees strength without restraint as needless violence. He was previously the Knight of Five.

During the second battle of Tokyo, Bismarck leads the Britannian forces guarding the shore against Li Xingke's invasion force. Li and Bismarck battle, with Li unable to defeat him. Bismarck compliments Li's skill when he purposefully takes a hit to move into position to rescue the Chinese command vessel. During Schneizel's attempted coup d'état of Emperor Charles, he intervenes to stop Suzaku's assassination attempt on the Emperor. Suzaku's "live" command urges him to flee before they even begin fighting, indicating that Waldstein is extremely dangerous. He later goes to Schneizel and reports him about the Emperor's plan being executed and between that, he asks Schneizel how much he knows and Schneizel asks what he refers to. During the Ragnarok Connection's activation, Bismarck said to Schneizel once Charles' plan succeeds, Schneizel will be left to rule the rest of the empire and after the plan stops, Bismarck sense Charles' death.

Following the death of the Emperor and Lelouch's ascension to the throne, Bismarck leads three of the remaining Knights of the Round and a squadron of Knightmares in an attempt to remove Lelouch from power. After Suzaku decimates all but Bismarck, Bismarck attempts to use his Geass, which allows him to see a few seconds into the future, to even the odds, claiming that the only person he ever used it against was Marianne. Suzaku's "live" command allows him to overcome Bismarck's Geass, and he slices the Galahad in half. Bismarck dies lamenting that he has failed Marianne.

Bismarck is proficient in combat with a sword, which he demonstrates when defending Emperor Charles from Suzaku's attempted assassination. He is equally competent in Knightmare Frame combat, being able to engage Li Xingke's Shen Hu on equal terms, and emerging unscathed from the battles fought in Japan between the Britannian Empire and the Order Of The Black Knights.

Bismarck's Geass allows him to see into the immediate future. The Geass Sigil appears in his left eye, which is sewn shut to keep him from using it when not necessary. He is seen using his Geass only several times during his fight against Suzaku. He also states that he has only used his Geass once before against Marianne. Who he received the Geass from is unknown, although he most likely recieved it from V.V.

He appears as the Knight of One, as a zombie member of the Knights of the Round in Nightmare of Nunnally. He and the other Knights of the Round who are turned into zombies face off in Sutherland Sieg-like machines against the contingent of forces led by Zero, Suzaku, and Euphemia li Britannia, and personally fights Zero. Upon Charles and Marianne's defeat inside Eden Vital, he concedes defeat with their passing as well, and crumbles into dust along with the rest of the Rounds. 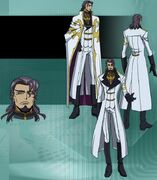 Bismarck's final moments in Oz the Reflection
Add an image to this gallery
Retrieved from "https://codegeass.fandom.com/wiki/Bismarck_Waldstein?oldid=63286"
Community content is available under CC-BY-SA unless otherwise noted.