'Ayano Kosaka' (香坂 アヤノ Kōsaka Ayano) is a girl who is in Ryo Sayama's group. In the end of episode, she along with the rest of W-O squad also Ashra Strike Force live a quiet life with the Roma grannies.

Ayano seems to be very calm and collective as she doesn't object during missions and carries them through without any emotional issues. Unlike her friends she seems to be very picky about what new life she wants to start as she objects against serving in the EU but her friends don't care about what new life they could start. It is unknown why she likes her wakizashi but it could be a possible family item is the only thing from her home country of japan that she has.

Ayano and her group puts Ryo Sayama's plot into action by attacking the vehicle General Gene Smilas was in. Their plan was executed perfectly, however Akito Hyuga joined the scene, he destroyed Ryo's Knightmare Frame, resulting in their group failing to kidnap the E.U. general, Gene Smilas. However, they are recruited by Leila and are now part of the "wZERO" group, piloting a Special Forces Knightmare, the Alexander Type-02.

Despite her, Ryo and Yukiya Naruse being acquitted of all criminal acts they committed; including the murders of all the soldiers who died protecting General Smilas' convoy from their ambush, she expresses to her cohorts that she is very dissatisfied with the life they had begun to lead after being recruited by Leila Malcal for no other reason in particular than that Leila confiscated her kodachi.

When the three youths found out about the nature of the wZERO's missions, they tried to escape. Ayano escape through a hidden passage in the castle walls. Lelia however caught up with her where the former Britannian tried to convince them to return before Oscar Hamel's Guard troops could find them first. Ayano was claimed that the EU were using Eleven lives like nothing and that an officer like Lelia who stays behind would not understand. Lelia however convinced her to return with the promise that she would enter combat together with them. To further lessen the casualty rate, Lelia decided to deploy drones to strengthen their lessen manpower.

The Wyverns were deployed to launch a commando raid in the Battle of Slonim behind the Britannian lines via an orbital rocket. Upon landing however, the youths turned on Lelia trying to kill her and escape. They changed fire with Akito but they were interrupted by Britannian bombardment.

Trying to escape the fire, they engaged Britannian Liverpools and Sutherlands. Deciding to put aside their conflict, the Wyverns continued their main objective and advanced on to Slonim.

The city however was abandoned and they were soon ambushed by the Knights of St. Michael's Gloucesters. The Britannian knights under Ashley Ashura destroyed all of the AI-Alexanders and pressed hard against the rest of the human pilots.

Ayano duelled the knight Jan Manes who disabled her rifle forcing her to fight with her sword.

However, later Akito's berserked brain waves spread to the other Alexanders. Under the new blood lust, Ayano and the Wyverns pushed back against the knights. Ayano herself disarmed two Jan Manes and another knight.

As the Britannians were pushed back, the brain waves threw a backlash causing the Wyverns to get a glimpse of Akito's past. During this time, a psychic backlash struck the Wyverns which caused the St. Michael knights to rally and disable the Alexanders though all the pilots survived and retreated on foot.

They witnessed Akito's encounter with his brother Shin Hyuga Shing who wanted him dead before being relieved by EU reinforcements. Gaining sympathy for Akito, Ayano and the others stayed with the Wyverns.

Back in Warsaw, the Wyverns became trapped for two months due to a lack of transportation back to Castle Wolf.

By this time, Ayano and the Wyverns have gone over their grudge against Lelia calling her by first name basis. Ayano in particular seem to have made a sisterly bond with her enjoying looking through clothes.

However, the Wyverns' former commander baring grudge against Lelia and now in charge of supply illegally destroyed their records causing them to be trapped outside camp.

There they were taken in by a group of elderly gypsies after an attempt to swindle them. The Wyverns then bonded with the gypsies as well as with each other. Ayano even called Lelia sister in her sleep.

Ayano later found Akito studying her kodachi where Akito revealed Lelia's decision to return the sword after the mission. Ayano revealed though her ancestors were of the old samurai, she and the others were born and raised in Europe. Ayano returned the kodachi back to Akito claiming it would bring him luck while blushing. When Akito expressed his dislike of fish, Ayano and Ryo proceeded to force him into eating it.

Later Akito and the Wyverns had returned to Paris when the EU was struck by Julius Kingsley's Ark Fleet plan, where it exploited the EU's internal instabilities, causing major rioting and violence in the cities.

The Wyverns figured out the Britannian plan and now prepare to board the leading Ark Fleet ship and sink it. Akito, however, wanted to go alone and Ayano witnessed the fist fight with Ryo where Akito was finally convinced to let the other Wyverns help him. 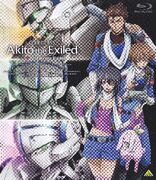 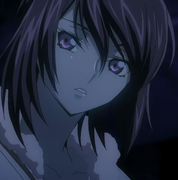