Ayame Futaba (双葉綾芽, Futaba Ayame) is one of the new volunteer members of the Black Knights introduced in the second season. She serves aboard the Ikaruga and appears to run its defensive systems. She wears her hair as a pair of purple mid-length curls that curve around her eyes.

Ayame is introduced as a volunteer for the Black Knights and is usually seen alongside Minase Mutsuki and Ichijiku Hinata. She was present during Viceroy Nunnally's Special Zone where one million Zeroes were exiled from Japan. After being exiled, she appears inside the Ikaruga. She is present during the battles that ensue in the Chinese Federation.

During the final battle, she is seen comforting Tamaki in a hospital after he is defeated by Suzaku in his Lancelot Albion. In Japanese, she respectively refers to him as "Senpai." 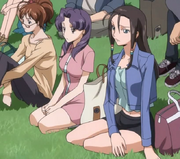 Add an image to this gallery
Retrieved from "https://codegeass.fandom.com/wiki/Ayame_Futaba?oldid=69341"
Community content is available under CC-BY-SA unless otherwise noted.