A wild, impulsive and arrogant man who believes that only luck dictates one's life, he has shown to have little regard for his own life as he 'possesses' an abundant supply of luck. However, he does seem to care the lives of his comrades. He was also the leader of one of the units within the Knights of St. Michael.

Ashley was eager to lead the Asura Strike Force under orders from the new Grand Master Shin Hyuga Shing who led the Knights of St. Michael against the EU W-0 squadron in the Battle of Sloim. His knights ambushed the European knightmares as Ashley himself engaged the Ghost of Hannibal himself Akito Hyuga. The knights managed to destroy all the drones and began to overwhelm the pilots when Akito's Geass influence spread to the rest of W-0 pilots. Under the new blood lust, the EU turned the tide.

Ashley fought fiercely against various W-0s and managed to hold out against a berserk Akito. Eventually, Akito defeated him but as the European Japanese pilot made the killing blow, Johanne Fabius (one of Ashley's knights he had chastised earlier for being naïve) sacrificed his life for Ashley by getting in the way of Akito's attack. In his dying breath, Johanne wished his commander good luck.

Johanne's sacrifice seemed to horrify Akito, who stood dumbstruck as his Geassed mind blacklashed the other pilots. Without the blood lust, the St. Michael knights rallied and disabled the rest of the W-0 knightmares.

Some time after the battle, he was sent to retrieve the Ark in Greenland, and received a new Knightmare, Ahuramazda. When Akito and the others attacked the airship, he engaged them in battle. After a fierce struggle with Akito, he is defeated when Akito went berserk. Before Ashley was killed by Akito, the other members of W-0 stopped their friend before he crushed Ashley in Alexander's hands. Akito then exited his Knightmare to give Ashley the chance to avenge his friend; Ashley hesitated, but as he pulled the trigger, the gun was revealed to be out of bullets. After that, the two made peace, but were interrupted when bombs that Shin had placed on the ship went off.

Surviving the explosion, Ashley allied with W-0 and swore revenge on Shin for sacrificing him. He was attacked by Jean Rowe who claimed he was a traitor but he comically shouted back by calling her the traitor. After Akito managed to rescue Leila Malcal and Claus Warwick, Ashley brought them to their boat to head back, at which point Ashley joined the European Union. 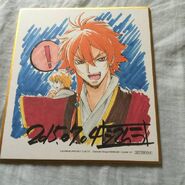 Ashley in W-0 uniform
Add an image to this gallery
Retrieved from "https://codegeass.fandom.com/wiki/Ashley_Ashra?oldid=62199"
Community content is available under CC-BY-SA unless otherwise noted.