Code Geass Wiki
Register
Don't have an account?
Sign In
Advertisement
in: Characters, Holy Britannian Empire, Knights of the Round,
and 5 more

First
The Day a Demon Awakens
Last
Re;

See Knights of the Round

Anya Alstreim (アーニャ・アールストレイム, Ānya Ārusutoreimu) is a major supporting character in Code Geass: Lelouch of the Rebellion R2. Her Seiyū is Yūko Gotō, and in the English dub she is voiced by Stephanie Sheh. She is the Knight of Six.

Anya is subtly noted as being a beautiful young girl, with a petite build, pale complexion, light pink hair tied up in a ponytail that always has thick strands of hair that falls next to her face and that also creates bangs on her forehead, and a rouge-red eyes. She is most often seen wearing a semi-revealing outfit, which consists of a black crop-top with a golden crest of the Britannian Military placed in the center of it. On top of that, she wears a white vest-like garment that has a stiff collar pointing outwards, the back of her cloak is cut out to reveal her lower back, before joining back together above her hips, and splitting into two different leaf-like shapes and ending just below her knees. Anya also wears white shorts held up by a brown belt, black boots that cut below her knee cap, with pink socks that reach her bottom thigh, notable bands of leather that encircle her leg above her socks, black gloves that are cut off at her elbows, and - probably one of her most prominent and well-known facts of her appearance - a red tattoo on her upper-left arm, bearing a likeness to the one on her top. When piloting her Knightmare Frame, Mordred, Anya wears a revealing bodysuit-type leotard that leaves much of her stomach and torso bare and flares out at the bottom in gold-tipped black fringes; it also retains the same golden insignia on her crop-top. It had long sleeves in which there there magenta-colored covers along her forearm. With that, she wears mid-thigh high magenta colored boots.

Anya comes off as rather stoic, deadpan and uninterested, similar to a person who suffers from depression. Anya maintains a detached attitude in most situations, usually declaring most things to be boring or dull. However, this detached attitude also gives her a lack of "common sense"; she had piloted her personal Knightmare Frame for the sake of capturing Lelouch’s hat, disregarding the fact that she was piloting her Mordred in a non-combat area and had aroused the suspicion of the military and the Knight Police, sending the Tokyo Concession into Defcon 2.

Anya is loyal to Britannia and her Emperor, never questioning or disobeying orders given to her. This loyalty is further shown when Lelouch takes control of the empire after "killing" Charles zi Britannia, Anya sided with Schneizel and his faction, seeing him as the legitimate of the two.

On the battlefield she's a deadly and fully capable pilot, showing no mercy to her enemies. Her fighting style reflects her heavily-armored Knightmare; she annihilates her enemies with overwhelming force and doesn't hesitate to kill disabled foes.

Despite her stoic personality and ruthlessness in battle, Anya does have a softer side as she has been shown to be warm and caring towards her friends. She treats Suzaku as an equal despite him being an Eleven, she showed deep sadness along with the others after Shirley's death, and she appears to like cats. Anya is also rather protective of Nunnally, having served as her personal knight before Suzaku, and was shown guarding her and escorting her away from the stage during the schedule exile of zero, fearing for her safety.

Although Anya seemingly lacks emotions this is not the case, demonstrated during her final battle with Jeremiah Gottwald in which she admits that she "has no memory" with tears in her eyes. She also cried at one point during her time as Nunnally's knight. It would seem that her lack of memories due to Marianne's presence bothers her immensely and her outward personality masks how truly sad she is inside.

At the end of the series and in Turn 25.01, Anya seems much happier and more open due to her memories having been restored by Jeremiah and now having a more normal and peaceful life.

Anya Alstreim is Knight of Six in the Knights of the Round and pilots the heavy assault Knightmare Frame, Mordred. She is a quiet and introverted person with a mysterious past and also holds the distinction of being the youngest individual ever appointed to the Knights of the Round at the age of 15. She is shown to have a lack of emotion, and has little faith in her memory, so she maintains a log/blog which she frequently updates with pictures she takes with her camera-phone that she never seems to be without. As one of the younger members of the Knights of the Round, she is close friends with Suzaku Kururugi and Gino Weinberg. Suzaku's cat Arthur also takes a liking to her, though the cat seems to be more affectionate to everyone except Suzaku himself.

In the past, she went to stay at the Aries Villa as an apprentice for proper etiquette and witnessed Marianne's death at the hands of V.V.. It is also assumed that it was how Lelouch's photo was in her camera-phone. In the aftermath, Charles erased many of Anya's memories, specifically those relating to her time spent at Aries. It's also likely that memories of Anya were erased from people who should recognise her, but don't - specifically, Lelouch and Nunnally, and likely also Euphemia and Cornelia. In addition, Marianne used her Geass to transfer her mind into Anya, whose presence can then cause further memory problems when Marianne's consciousness awakens. As a result of that, contact with Lelouch and C.C. can cause a psychic response.

Anya appears in the first episode of the second season alongside Suzaku and Gino when Suzaku declares to the Emperor that he will be the one to kill Zero. She subsequently joins Suzaku in Area 11 along with Gino. When Suzaku receives paperwork to order the execution of the Eleven who tried to kill him and does not immediately sign it, Anya does it for him and asks him if he is some type of masochist, since he volunteered for duty in a country that hates him. Suzaku answers that he does not mind being hated because someone in the past understood him and he has always considered himself to be a sinner.

She joins up with Schneizel following this, though Kanon expresses concern about how reliable she is. During the battle against Lelouch's army, she stated that she doesn't like the current Lelouch. She faces off against Jeremiah Gottwald and manages to destroy the outer body of the Sutherland Sieg. However, Jeremiah uses

the Sutherland stored inside in a kamikaze attack, which heavily damages the Mordred,exposing the Cockpit. He is prepared to kill Anya but chooses to spare her life when she makes mention of having no memories. Realizing that she is under the influence of Geass, he restores her memories with his Geass Canceler.

In the epilogue, she and Jeremiah are seen tending to an orange farm together. As a result of this, she may have possibly resigned from her position as Knight of Six. She is also among the many characters who have attended Kaname Ohgi's and Villetta Nu's wedding.

In the final battle, instead of Kallen, she fights alongside with Gino against Suzaku in the Damocles. She enrolls in Ashford Academy as a student along with Gino in the epilogue.

In Code Geass: Nunnally in Wonderland, Anya plays the role of the White Rabbit and is the first person Nunnally sees in the story. While on her way home, she drops her phone, which contains pictures to help her remember, but it is picked up by Nunnally. When Nunnally arrives at her house to return her phone, she thanks Nunnally and invites her inside, where she meets the Duchess (Milly Ashford) and the Cook (Nina Einstein). Later, when the March Hare (Kallen Kōzuki) storms in due to the Cook's yelling, the White Rabbit fights her to determine who should be the only rabbit in the forest, with both of them using carrot-like objects in fashion similar to the weapons used by their respective Knightmares. Their fight ends up causing Nunnally to leave the house, much to Lelouch's anger, since he wanted them to be more hospitable to Nunnally. After Nunnally leaves, the White Rabbit, the March Hare, the Duchess, the Cook, and the Dormouse (Rivalz) realize that they are missing the Mad Hatter. 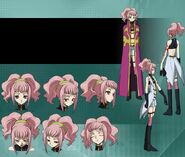 Anya in her KnightMare, Mordred.

Anya at farm of Jeremiah.

Marianne uses her Geass to transfer her mind onto Anya