Andreas Darlton (アンドレアス ダールトン, Andoreasu Dāruton) was a confidante and a loyal subordinate to the Second Princess Cornelia. He held the rank of general in the Britannian Military as well as being the leader of the Glaston Knights.

He is an extremely tall, somewhat brutal looking man with a diagonal scar running across his face.

Darlton is a soldier and loyal subordinate to Cornelia and will follow any orders from her. He does not particularly care for the rampant racism that plagues the Britannian military, making it clear to Suzaku that effectiveness in serving a purpose is equivalent to merit, and also refusing Euphemia's order to kill all the Japanese while she was under the influence of Geass. In the anime, he is also one of the few Britannians that actually approves of Suzaku's ascension to knighthood, being one of the first to clap at the conclusion of his knighting ceremony while the other Britannians are reluctant to do so. During the Battle of Tokyo, Darlton disables Cornelia's Gloucester under the influence of Lelouch's Geass and is subsequently killed by the Gawain's Hadron Cannons. In the Code Geass picture book 8.75, Darlton is revealed to have multiple adopted sons, five of whom became the Glaston Knights.

Darlton is first seen alongside Cornelia who is now the Viceroy of Area 11 due to Clovis' death. After pinpointing the general location of the Japan Liberation Front's HQ, Darlton deploys in his Gloucester along with Cornelia, Guilford and the Britannian Military to the Narita mountains to finish off the JLF. Once they have arrived, Darlton leads a portion of the group up the mountains to locate where the JLF's knightmares have been deploying. After finding said location, he tells one of the soldiers to light the signal to let the rest know where it's at. Once Zero appears and creates a landslide with Kallen's Guren Mk-II, Darlton's group is caught in the landslide and most of his forces are destroyed. Hearing that Cornelia is caught in a trap, he tells his men to fall back and regroup to help Cornelia. However, Tohdoh appears in the battle with the remainder of the JLF forces and catches him in a pincer assault. Following Zero's retreat, Darlton and Guilford were able to force Tohdoh and the Four Holy Swords to abandon their knightmares and retreat.

He is seen again when Suzaku is appointed as a knight for princess Euphemia, being the second to clap for him.

Darlton reappears at the SAZ ceremony since he was sent to oversee it by Cornelia who opposed it. He is later shot by Euphemia, who was under influence of Geass, when he tries to stop her. He approaches Zero, asking him what he had done to Euphemia, and Zero activates his geass. He is later seen under the influence of Lelouch's Geass during the Assault on Tokyo Settlement. He is piloting his Gloucester and is able to disable Cornelia's Gloucester and also injures her. Realizing that he just attacked Cornelia confuses him. However, Lelouch realizing that Darlton's usefulness is over, he uses the Gawain's Hadron Cannons and kills Darlton. As Darlton dies, he shouts Princess Cornelia one last time. 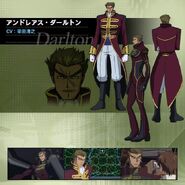 Add an image to this gallery
Retrieved from "https://codegeass.fandom.com/wiki/Andreas_Darlton?oldid=73362"
Community content is available under CC-BY-SA unless otherwise noted.