The Amanecer is a Knightmare Frame based on the Akatsuki. It was developed for and given to the Area 24 resistance group, the Star of Madrid, by India. It is also called the "Red Manteau" by Britannia.

Though based on the Akatsuki model, its performance has been enhanced and is closer to that of the commander models or the Zangetsu than the mass-produced model, and can fight on par with the Vincent Gram.

It can use an experimental version of MVS blades, but unlike the Britannian counterpart, they must be mounted on the arms' Brazo Caliente power generation system equipped on both arms to activate, and unlike the genuine Britannian article, the electric current passes from the hilt to the blade attaining an MVS-like effect. Espada(Swords) are housed in the Pluma Libélula special equipment, which can also generate an energy shield similar to Blaze Luminous or Radiant Wave Shielding, which is strong enough to block blasts from Hadron Cannons. Large Slash Harkens, called Slash Hatken Grande, are mounted on the shoulders. 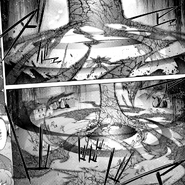 Amanecer using its Pluma Libélula to scatter the hadron beam

Espada, housed in the Pluma Libélula

Espada mounted in the Bazo Caliente for MVS use. Espada emit a bluish-white glow while activated.

Add an image to this gallery
Retrieved from "https://codegeass.fandom.com/wiki/Amanecer?oldid=73750"
Community content is available under CC-BY-SA unless otherwise noted.