The Alexander Valiant designed for the personal use of Ryo Sayama of the Europia United Special Forces unit wZERO.

Following their previous battle, the combat data of the W-0 team was reviewed by the research division, and was used to further improve the performance of each of the machines used by the group. In addition, the speed of its transformation has also been improved. They have also been given new weapons developed at the EU's Barcelona Lab.

Unlike the original Alexanders, the Alexander Valiant does seem to posses a cockpit ejection system that can also be activated remotely.

Each has been repainted blue and a secondary personal color or each of their pilots, with orange for Ryo.

The Valiant's technology are on par with the Vincent Ward. 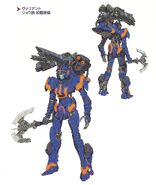 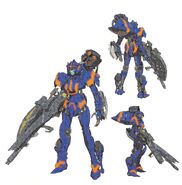 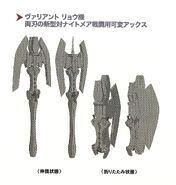 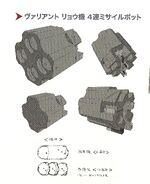 Add an image to this gallery
Retrieved from "https://codegeass.fandom.com/wiki/Alexander_Valiant_Ryo_Version?oldid=73513"
Community content is available under CC-BY-SA unless otherwise noted.