Start a Wiki
The Alexander Red Ogre is an Alexander variation used by Ashley Ashra after he joins W-0.

The Alexander Red Ogre was originally developed as a custom Alexander for Akito Hyuga, but was instead given to Ashley when Akito's original Alexander was upgraded into the Alexander Liberte.

Using an Alexander Liberte as a base, the Red Ogre possesses a new OS written by Anna. The Knightmare also possesses an additional set of limbs that it uses while in Insect Mode. Its weapons include a pair of Heat Swords, a Heat Knife, and the "Judgement Mk2" Assault Rifle, and has multiple additional ammo cartridges stored at various points on the frame.

The two cylinders in front of the Heat Knife are an unnamed weapon but works like handheld Heat Round to pierce enemy Knightmare Frame in close combat. The shoulder pod carries missiles that can home on enemies. Finally it has smoke discharges that went unused.

Its color was chosen by Ashley, and the name Red Ogre was given by him. 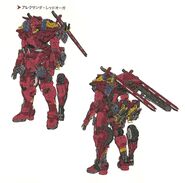 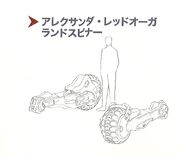 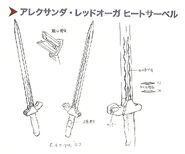 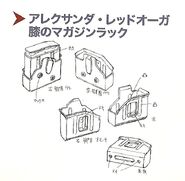 Add an image to this gallery
Retrieved from "https://codegeass.fandom.com/wiki/Alexander_Red_Ogre?oldid=74618"
Community content is available under CC-BY-SA unless otherwise noted.