Start a Wiki
The Alexander Drone is a mass-produced version of the Alexander Knightmare Frame used by wZERO.

In preparation for the Holy Order of Michael's assault on Castle Weisswolf, the original unmanned Alexander Drones were converted to be used by the Security Forces under Oscar Hammel to aid in the castle's defense, as well as one to replace Yukiya's lost Alexander Valiant.

Originally developed to bolster wZERO's numbers on the battlefield, the AI program required a an operator to issue commands in order to perform, either from a commander on the field or other operators. However, the combat performance of this unmanned Knightmare was low. However, now constructed to for the use of actual pilots, the Alexander Drone is easily able to operate and perform on par with other Alexander machines. 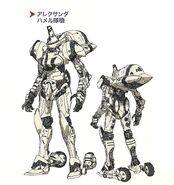 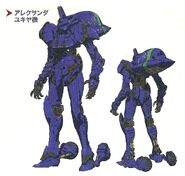 Add an image to this gallery
Retrieved from "https://codegeass.fandom.com/wiki/Alexander_Drone_(Mass_Production_Model)?oldid=73747"
Community content is available under CC-BY-SA unless otherwise noted.