The Alexander (アレグサンダー Aregusandā), a new Knightmare Frame, has the concept art of an unusual-looking Knightmare Frame, whose appearance suggests Sixth-Generation or later. It is a special operations unit, used by the secret W-0 unit of the E.U. army, that was developed by Captain Anna Clement and is piloted exclusively by Eleven soldiers. One of these Knightmare Frames is piloted by Akito Hyuga. Unnusual for a Knightmare frame, it uses a hybrid mode of movement, shifting between standard landspinners, bipedal mode, and a quadrupedal mode as the situation calls for it.

Completely unlike the Knightmare Frames used by the Holy Britannian Empire and the Black Knights, the Alexander is a high-spec Knightmare frame that utilizes original technology developed by its designer, Anna Clement. With a specialized "Insect Mode" transformation mechanism, a light-weight body and a high-performance frame, its mobility vastly surpasses that of the E.U.'s Panzer-Hummel and most other Knightmare Frames. The cockpit block is on its back, but it isn’t equipped with a Cockpit Ejection System, because the actual battlefield forces of the E.U.’s special-ops unit “W-0”, the former Japanese (Elevens), aren’t counted as a loss in fighting strength even if they are killed in battle. Its armaments consists of two WAW-04 “Judgement” 30mm Linear Assault Rifles which can be either handheld or attached to sub-arms on either side of the cockpit, two fixed "Uruna Edge" (ウルナエッジ) knifes that are stored underneath the wrists of the Alexander and are capable of piercing through the armor of Knightmares, and two spike-shaped Tonfas that are attached to the arms and are handheld in use.

The Alexander Type-02, a variation of the Alexander, is a mass produced Knightmare Frame used in the Special Forces Unit "W-0." These Knightmares are piloted by Ryo Sayama, Yukiya Naruse, and Ayano Kosaka from the "W-0" group. 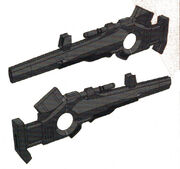 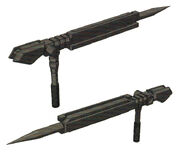 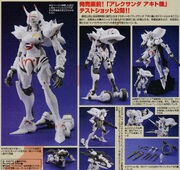 Alexander (model)
Add an image to this gallery

Based on the closing shots of the first episode, Anna Clement may have based the Alexander or at least its quadrupedal mode, on grasshoppers.

Retrieved from "https://codegeass.fandom.com/wiki/Alexander?oldid=38523"
Community content is available under CC-BY-SA unless otherwise noted.