The Alexander (アレグサンダー, Aregusandā), a new Knightmare Frame, has the concept art of an unusual-looking Knightmare Frame, whose appearance suggests Sixth Generation or later. It is a special operations model used by the secret "W-0" unit of the E.U. army and was developed by Captain Anna Clément. The Alexander has been employed exclusively by Eleven soldiers so far. Following the Battle of Narva, only one of this model of Knightmare Frame remained in existence. It was piloted by Akito Hyuga, and became his personal Knightmare until it was succeeded by the Alexander Liberte. It is an unusual Knightmare Frame that uses a hybrid mode of movement. Alexander can quickly shift between standard Landspinners, bipedal mode, and a quadrupedal mode depending on the situation. This prototype is sometimes referred to as a "fruitless flower", because it's design was not used in later Knightmare Frames, unlike the Guren and Lancelot.

Completely unlike the Knightmare Frames used by the Holy Britannian Empire and the Black Knights, the Alexander is a high-spec Knightmare Frame that utilizes original technology developed by its designer, Anna Clément. With a specialized "Insect Mode" transformation mechanism, a light-weight body and a high-performance frame, its mobility vastly surpasses that of the E.U.'s Panzer Hummel and most other Knightmare Frames. The cockpit block is on its back, but it isn’t equipped with a Cockpit Ejection System, because the actual battlefield forces of the E.U.’s special-ops unit “W-0”, the former Japanese (Elevens), aren’t counted as a loss in fighting strength even if they are killed in battle. Its armaments consists of two WAW-04 “Judgement” 30mm Linear Assault Rifles which can be either handheld or attached to sub-arms on either side of the cockpit, two fixed "Uruna Edge" (ウルナエッジ) Knives that are stored underneath the wrists of the Alexander and are capable of piercing through the armor of Knightmares, and two spike-shaped Tonfas that are attached to the arms and are handheld in use.

A unique feature of the Alexanders, invented by the science team of "W-0", is the BRS, or Brain Raid System. The BRS is an experimental neural interface meant to link and synchronize the brainwaves of the Alexander pilots, as a means of improving reaction time and combat performance.

Main article: Alexander Type-02 The W0X Type-02 Alexander Type-02, a variation of the Alexander, is a mass produced Knightmare Frame used in the Special Forces Unit "W-0." During the Battle of Slonim, three of these machines were used by the three new members of the Wyvern Squad: Ryo Sayama, Ayano Kosaka, and Yukiya Naruse. Each of their machines were customized for their designated pilots.

Main article: Alexander Drone The Alexander Drone is a mass-produced variation of the Alexander that can be controlled by an Artificial Intelligence program with help from a field commander/operator. Despite what the name implies, the Alexander Drone can also be piloted, such as by Yukiya or the Castle Weisswolf security forces during the siege by the Knights of St. Michael.

Main article: Florence The RZX-12TM1 Florence is a variation of the Alexander, built from an abandoned Alexander Drone. It still retains the Insect Mode, and possesses added weaponry consisting of 2 back-mounted Hadron Cannons, 2 arm-mounted MVS Large Claws, and 2 waist-mounted Slash Harkens. This unit became the personal Knightmare of Monica Krushevsky, the Knight of Twelve.

Main article: Alexander Valiant The Alexander Valiant is an improved version of the Type-02 model, boasting enhanced speed and overall performance. Three of these machines were created for the three new members of the Wyvern Squad: Ryo Sayama, Ayano Kosaka, and Yukiya Naruse. Each of their machines were customized for their designated pilots based on data gathered from their performance in the Battle of Slonim. 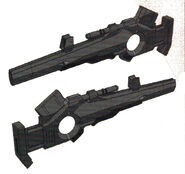 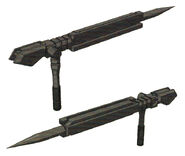 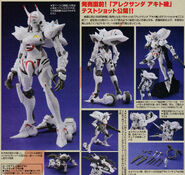 Concepts of the Alexander KMF from the vol. 1 liner notes booklet