The Ghost of Hannibal

First
The Wyvern Arrives
Last
To Beloved Ones

'Akito Hyuuga' (日向アキト Hyūga Akito) is the titular character and the main protagonist of Code Geass: Akito the Exiled. He is a former Lieutenant of the W-0 Unit under Leila Malcal.

Akito is a young man with blue eyes and long blue hair tied in a single braid, and is shown in promotional art wielding a kodachi with a white hilt and square guard. In the fifth episode he cuts off his braid, but later begins growing it out again.

Akito is shown as a very introverted person, a loner, and very much isolated within his squad. He is also shown to have a very twisted personality, due to his traumatizing childhood, the geass command his brother gave him, and his hatred for his brother.

Akito is quite intelligent, as he assists Leila in battle planning, and uses the geass command, given to him by his brother, to aid him in combat. His tactical knowledge combined with his fighting skills is one of the reasons he has survived all of his suicide missions. He can also be very clever in terms of resolving a conflict without violence (shown when he subdued Leila Malcal's step-brother and fiance Ioan Malcal). He is very mature for someone his age (when comparing his personality with Yukiya Naruse and Ryo Sayama who are the same age as he is).

But after staying with the elderly women in Warsaw, he is shown to have a softer persona and care for his comrades.

Akito was born in the E.U. He is an E.U. Knightmare Pilot with a rank of lieutenant from a special force, called W-0, that consists of boys and girls from Area 11. He is shown to be piloting the Knightmare Frames, Gardmare and Alexander.

It appears that he may be mentally unstable, as he is shown to enjoy battle to the point of blood lust, yet he appears completely calm under normal situations. He has a lack of emotion, not tending to display or express his emotions in any way. He also mentions that he "has died before." For a time, it was equally possible that this is due to mental instability, but was later proven to be that he was ordered to "die", but instead lived.

Akito is under the effects of a Geass that he appears to control at will, allowing him to savagely kill his enemies in the battlefield. When he used Alexander to ambush and destroy a full squad of Britannian Knightmare Frames, the enemy pilots referred to him as "Hannibal's Ghost".

Also, Akito claims to see the spirits of his fallen comrades, and the only reason he is still alive is to kill his older brother Shin Hyuga Shaing.

Akito, along with his other Japanese comrades, participated in a military operation with a survival rate of 5% in order to allow the E.U. Army's 132nd Regiment to escape from Narva. Akito was shown fighting the Britannian Knightmares using the Alexander. During the battle there was a red outline circling his pupils, which indicates that he had been previously Geassed. He also managed to destroy all his opponents without any difficulty and, although the military operation came out as a success, Akito turned out to be the only survivor while the rest of his comrades all ended up dead.

Following these events, he joined the retreating troops of the 132nd Regiment and returned to the western part of Europe. Akito was promoted to Lieutenant and then assigned to escort his superior, Leila Malcal. During the failed attempt to kidnap General Gene Smilas by a Japanese terrorist group, he piloted a Gardmare against Ryo Sayama's Glasgow. However, his Knightmare Frame gets destroyed during the battle. He then engages in battle with a grenade launcher and was able to defeat Ryo by bringing his Knightmare Frame down single-handedly.

Ryo, Yukiya Naruse and Ayano Kosaka attempt to free themselves from being forcibly put in the Wyvern squad as they realize that being in the Wyvern squad is akin to suicide. Yuyika manages to enter Akito's room and tells him that he will die here as he is 'too dangerous to live'. Akito manages to convince Yuyika to drop his handmade bombs. At this point Lelia manages to bring back the other two into the Wyvern squad by voicing her intentions of joining then in the next battle.

In a flashback, Akito and the rest of the Wyvern squad receive their mission briefing concerning their next mission to use the orbital  transport to enter behind enemy lines and help the European union army to push back the invading Britannian army. Lelia reveals that she will be joining the mission to act as the operator for a number of drones.

Using the orbital transport rocket the squad members circle the globe and is treated to a sight of the earth. The knightmares separate from the rocket and land behind the Britannian military lines.

Upon landing Akito and Lelia are fired upon by the other members of the Wyvern squad only to be interrupted by shelling by the Britannian's ultra long range cannons. Akito come under fire from a Knightmare squad but manage to destroy the attackers.

The Wyvern squad and their drones come to the town of Slonim only to find that the town is empty. The drones survey the town but are ambushed by Knights of St. Michael's Ashra squad. Akito and the others were pressed hard by the Britannian knights.

Under influence of Geass, Akito went berserk and he turned the tide against the knights. This feeling of increased blood lust effects the other members excluding Lelia and causes them to fight with increased capabilities. They managed to disable several St. Michael units. As they pressed hard, Akito dueled with head knight Ashley Ashra who is in a red Gloucester. After a brutal and extended fight, he manages to defeat Ashley Ashra and is about to kill him when one of Ashley's knights Joannes intervenes who took the blade for his commander.

However, at this point his brother Shin Hyuga Shaing arrives in his Knightmare Vercingtrorix and disabled Akito's Alexander. The influence of Geass stops working and Akito and other members see a memory of the past where Akito's brother tries to kill him with his Geass. During this time, the blood lust backlash struck the Wyverns and the St. Michael knights took advantage of it to disable the rest. Akito's brother astounded that Akito is still alive believes that Akito is still alive for his sake and orders him to take a blood oath with the knights of St Michael and offer up his life for his cause.

At this point the members of the Wyvern squad converge to Akito's location on foot. Akito tells them to leave. However, by this time Shin Hyuga Shing retreats from Sloim and tells Akito that he will be back for him.

Despite all odds the Wyvern squad manages to complete their mission and is allowed to return home as the EU reinforcements arrived.

In a brief conversation with Lelia, Akito tells her that it is because he and his brother share the same blood that his brother is trying to kill him. He declares that " I've already died once, I'm simply returning the favour."

Unfortunately, the Britannian forces counterattacked and retook the city of Sloim.

Two months later, Akito and the Wyvern squadron were trapped in Warsaw due to the HQ's lack of transports. The Wyverns outside camp tried to go around the town. However, the former Wyvern commander deleted their records out of spite and the group became trapped outside as they had no money or uniforms. During this time, Akito fell into swindling trap by a group of elderly Romani women who demanded payment for hurting their leader. Seeing that they had no money and their plight, the women took them to their camp as "servants" to repay them. During this time revealed to Leila that the reason he died before was that Shing used his Geass on him and ordered him to "Die", but instead he lived (it is mysteriously implied that he survived due to consuming a pill given to him by his mother, who appeared to be under the influence of Geass); he goes on to state that he should have stayed dead. Leila, greatly touched and worried, hugged Akito and expressed her gratitude that he survived because she would have lived to meet him. Comforted, the two returned to the Romani camp and where they danced together to forget the painful past they suffer. Akito also grew closer to the rest of the squad where he attempted to return Ayano's kotachi by Lelia's orders. Ayano however gave it back to him. He also expressed his dislike of fish surprising the rest of the Japanese who then proceeded to force him into eating it.

Akito and the Wyverns had returned to Paris when the EU was struck by Julius Kingsley Ark Fleet plan where it exploited the EU's internal instabilities causing major rioting and violence in the cities.

The Wyverns figured out the Britannian plan and now prepare to board the leading Ark Fleet ship and sink it. Akito however wanted to go alone and this got him into a fist fight with Ryo where Akito was finally convinced to let the other Wyverns help him.

Leila and Akito are in a superior and subordinate relationship being commanding officer and lieutenant respectively. Akito is shown to have a great deal of respect for Leila, and it is implied that Leila has feelings for Akito.

Leila, shown in the later episodes, has a great deal of concern for Akito's wellbeing. She is also the only person whom Akito told his secrets to, as well as the only one he allowed to see him in a moment of vulnerability, showing how much Akito trusts her.

In the fourth episode, after Shin used his Geass in an attempt to get Akito to kill Leila, Akito was able to resist the Geass command completely and carry Leila to safety. This implies that Akito reciprocates her feelings, as the only person to previously do this was Euphemia li Britannia, who broke the Geass and avoided killing Suzaku Kururugi. This is confirmed in the final episode, when the two kissed at the very end.

Akito and Shin are half-blood brothers (they had the same mother but different fathers). They were once close to each other. Even when Shin wanted to be alone, Akito stubbornly came back to him when they were children. But as it came out later- not only then. When they meet again after years there was something what get in Akito's hair about his older brother, even if it seems like he was scared of him, at the same time he wanted him to get back to normalcy. Even if Shin killed their family. Akito is also shown to have great respect to his brother by calling him nii-san and nii-sama. He believed to the last moment in his change and haven't given up on him.

Akito's fighting over the stratosphere layer

A colorful sketch of Akito 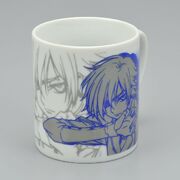 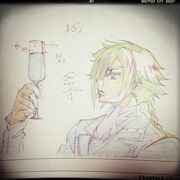 The faces of Akito and the poses of Leila

The childish Akito and his big brother 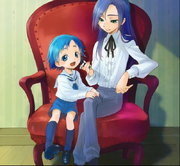 Shin and Akito in their younger years

Akito with his mother and Shin looking behind the scenes