Start a Wiki
The Ahuramazda is a heavily-armed Knightmare Frame manufactured by Euro Britannia and piloted by Ashley Ashra. It is armed with large triple gatling guns mounted to its arms as well as a pair of handheld pistols, and a pair of swords for close combat. Its armor is made of Schrötter Steel.

It is used by Ashley to defend Galia Grande. 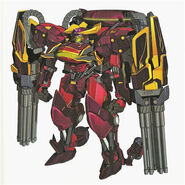 Add an image to this gallery
Retrieved from "https://codegeass.fandom.com/wiki/Ahuramazda?oldid=70771"
Community content is available under CC-BY-SA unless otherwise noted.