Start a Wiki
The Agravain (アグラヴェイン, Aguravein) is a custom Knightmare Frame piloted by the mysterious masked man Wizard, who supports the terrorist organization Peace Mark. Considering that Wizard's true identity is "Oiaguro Zevon", the leader of Britannia's secret "Pluton" organization, it is highly likely that this Knightmare Frame was developed in secret using Britannian technology and engineering, as even the members of the Glinda Knights taskforce who are testing out new prototypes are unaware of its existence. Its design and weaponry suggest that it is the prototype of the Gareth, the Britannian mass-production model of the Gawain.

Although its full capabilities are unknown, the Agravain appears to be equipped with the latest technology, as evidenced by the integrated Float System on its back. It possesses the same weaponry as the Gareth, including two Hadron Cannons on its arms, fourteen missile launchers (four on each leg and six on its chest) and eight Slash Harkens mounted in two quad-barrel launchers attached to its hips. In addition, it is equipped with two Maser Vibration Swords, which it can wield with the manipulator hands attached behind the Hadron Cannons on its arms. It is also equipped with a Blaze Luminous shielding system that completely envelops it. 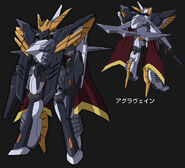 Agravain (Front and Back Sketch) 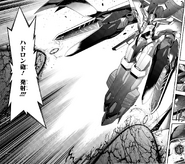 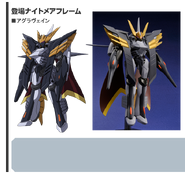 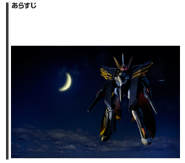 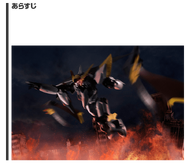 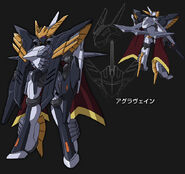 Agravain (Color) in O2 (with head unit lineart)
Add an image to this gallery
Retrieved from "https://codegeass.fandom.com/wiki/Agravain?oldid=69967"
Community content is available under CC-BY-SA unless otherwise noted.